I have been using Docker Desktop for well over five years with very few problems besides the typical host-to-container mount performance issues. After a recent upgrade to Docker Desktop 4.15.0, I was surprised to notice that Docker Desktop would no longer start. It just reported a “Docker Desktop starting…” message and wouldn’t continue.

I tried the typically suggested approaches:

Finally, after about two hours, a post on forums.docker.com by zcqian put me on the right track, so I wanted to promote it, along with some refinements and my complete solution (try parts or the complete procedure).

With any luck, you will now be back up and running again. Feel free to leave a comment if these steps change over time, and I will update this post accordingly.

Amid all the uncertainty and turmoil caused by this global COVID-19 pandemic, one thing I am grateful for is a newly kindled excitement to read physical books. As someone who is on screens nearly half the day, every day, I really enjoy the experience of disconnecting and reading a good printed book.

Today I wanted to take a moment to spread the word about A Selfish Plan to Change the World by Justin Dillon. 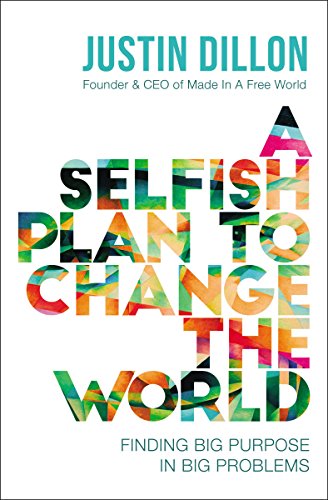 What if your search for meaning could solve the world’s problems? What if everything you are passionate about could save a life or change history?

In this paradigm-shifting new book, Dillon reveals the secret to a life of deep and lasting significance: the discovery that our need for meaning is inextricably linked to the needs of the world. Drawing upon his own unlikely transformation from touring musician to founder of a global movement and telling the stories of other surprising world-changers, Dillon shows how to create a life of deep purpose by stepping into the problems of the world. Taking readers on a journey from sweatshops in India to punk rock concerts in Ireland, Dillon exposes the limitations of the “giving back” approach involving donations and volunteerism to reveal the unexpected power of “giving in” to pursue self-interest in a way that alters the very dynamics of the world’s most challenging problems.

A Selfish Plan to Change the World is your “self-help-others” guide to a life that matters, demonstrating how you can repurpose your existing talents, backstory, and networks to improve the lives of others. Changing the world no longer belongs only to martyrs and professional do-gooders. You can live an extraordinary life. You can change the world. All you ever needed was a plan.

As I work towards finding my own riot throughout my life, I will certainly refer back to this life changing book. I hope this helps someone else as well.

Two weeks ago, I happily upgraded my Macbook Pro to macOS 10.15 (Catalina), which worked out well. As expected, it feels like a solid, stable operating system, and the update was painless.

Some of Apple’s tooling was also upgraded, including Xcode 11.1. Today I needed to update one of our iOS applications, and as usual, I fired up Xcode > Open Developer Tool > Application Loader. Where is Application Loader? Am I tired? Nope… it’s gone.

Xcode supports uploading apps from the Organizer window or from the command line with xcodebuild or xcrun altool. Application Loader is no longer included with Xcode. (29008875)

Well, to hopefully save someone else some painful internet gold mining, you now have two options:

1. If you want to use a GUI you can use the Apple Transporter application, which does the same thing only prettier.

2. If you want to use the command line, Cœur posted this on StackOverflow:

In 2017 web developers worldwide were caught by surprise when Google announced that Chrome 63+ would force HTTPS (via a preloaded HSTS header) on all .dev domains. This move was frustrating to many developers because .dev names were routinely used during the local development process, and now, unless you want to install an SSL certificate, that practice would no longer work. For example, if I was creating a new website for https://mattsimpson.ca, I previously would have used an unregistered, locally routed, mattsimpson.dev name on my computer during development, but now I would have to use something else. But what?

Well, it turns out that Mike West at Google kindly suggested a better standard, an official standard, where *.localhost is actually routed to localhost, and aptly named “Let ‘localhost’ be localhost.” This brilliantly simple standard would also negate the need for developers to, in many cases, manually modify their local /etc/hosts file in order to use a new local virtual host.

Besides the fact that this take-over-on-squatted-territory was an inconvenience to so many developers, I genuinely applaud Google’s efforts to enforce HTTPS where it can, and I appreciate the leadership demonstrated by providing a better technical solution for web developers.

All this to say, the .dev gold-rush is on now. Get yours. I’ve picked up https://mattsimpson.dev and also a few other nice ones, including a brilliant one for my daughter Myer (https://myer.dev), who will have the coolest domain if she ever chooses to become a developer in the future.

As I plugged in my Amazon Echo Dot today, an event that happens only once in a while, I remembered that owning this sort of technology is a probably bad idea… when you have three young kids.

Approximately 25-30% of households have children under nine years old, and out of those households, a high percentage have more than one child. Have you been privy to a troop of kids harass a piece of technology before? If not, you should pull up a chair, put on your patience cap, and watch chaos ensue. You wouldn’t think an AI could get angry… well, as it turns out, three kids can make Alexa want to turn herself off.

The whole event caused everyone in the room (AI included) to become frustrated and confused. Then it was turned off… until next time when I forget how frustrating it is.

If you happen to be a roaming Telus customer that has a BlackBerry DTEK60 (or potentially other models), and you’re getting a bit frustrated because your mobile data is not working with an error something like this:

The solution (in my case) was to create and use a new APN other than the default. To do this:

1. Go into Settings
2. Touch, More
3. Touch, Cellular networks
4. Touch, Access Point Names
5. You will likely see two existing APN’s in this list. Create a new APN for isp.telus.com. Yes, even if you already have one.

To creating a new APN click the + sign at the top, and the only two required field values you need are:

Name: It'll Work Meow (or whatever you want).
APN: isp.telus.com

Once that new APN is created, select it. You should be good to go.

I have been working a lot recently on my personal mindset. Karla just sent me this quote, which I truly appreciate and speaks to what I’ve been learning: I just happened to think about my Model 3 pre-order today that I placed way back on March 31 2016, so I headed over to the Model 3 website and was excited to find a “Check Your Estimated Delivery” button. After a quick login, I was both happy and sad to see that my date isn’t until “Late 2018“.

Happy because: 1) I don’t really want to get into a car payment just yet, so this actually gives me more runway to get everything in order. 2) The first Model 3’s being produced are (to my surprise) rear-wheel drive and as a Canadian the thought of rear-wheel drive in the winter is terrifying. I wanted the all-wheel drive model, which isn’t being produced for quite a while still.

Sad because, well, this vehicle is impressive and I really want one. Wow, 1.4 years seems like a long time.

Oh well, in the mean time I will sit here patiently waiting my turn.

Pre-orders of the Tesla Model 3 opened today at 10:30PM EDT, one full hour before the car was even unveiled by Elon Musk. The Tesla website was under heavy load before starting to automatically redirect all traffic to the launch event site, but I got an order placed by about 10:45PM!

It may seem a little odd to pre-order a car without having actually seen it, but I wanted to make a few points about why I would do this.

First and foremost, Tesla without a doubt understands technology, software, and user experience better than any other car manufacturer on the planet, and a sight-unseen pre-order is my ever-so-small way of demonstrating my appreciation of their commitment to design and engineering.

Secondly, beyond the marketability of creating a car that is better for the environment I believe Elon Musk and Tesla genuinely want to change the world with this. In other words, I don’t sense that this is only for the money, there is heart in this. It has also been an excellent strategy to create high-end luxury electric vehicles (Roadster, Model S, and Model X) that are bought-and-paid-for by the top income earners, and then use that revenue stream to build something else amazing that can be mass produced a lower cost.

Thirdly, I gained a huge amount of respect for Tesla when they open sourced their entire electric car patent library, which also demonstrated to me that they’ve got heart in this.

Lastly, it was a pretty safe bet that the Model 3 would be amazing, and I am now happy to report that I certainly wasn’t disappointed. It’s absolutely beautiful. In addition to being beautiful, Elon Musk presented limited, but impressive specs for a $45,000CAD vehicle:

Good for Tesla, better for the planet, and fun for my family. I’m looking forward to getting my Model 3 in 2018. After putting the kids to bed this evening, Karla and I sat down to watch a movie and unwind. We were browsing through what seemed to be an infinite number of titles, discussing how we could possibly select something amazing based solely on the cover and title. Yes, there are definitely UI issues with how these movies are listed, but that’s beside the point.

We were somewhere in the list close to a favourite of ours, Big Fish (2003), which has a subtle, simple, but beautiful cover, when I proposed that even Her (2013) could be good based on it’s subtly.

In the not so distant future, Theodore (Joaquin Phoenix), a lonely writer purchases a newly developed operating system designed to meet the user’s every needs. To Theodore’s surprise, a romantic relationship develops between him and his operating system. This unconventional love story blends science fiction and romance in a sweet tale that explores the nature of love and the ways that technology isolates and connects us all.

This made us both laugh out loud because it definitely sounded like something we could both enjoy watching, and it truly didn’t disappoint. What an interesting movie that explored “human” emotion and the very real impact technology increasingly plays on our lives. Understanding this complexity will become so much more important in the coming decade, as technology will be embedded into our very fabric.

Highly recommend Her; a great watch.